I began to forget words. Not complicated or unusual words, just everyday words. One afternoon I was driving with my son, and in the middle of our conversation, I forgot the word “flower.” I laughed it off, saying I was tired and needed more sleep, and I did because I was struggling with insomnia. But then I began forgetting words in my professional life, and suddenly the stakes were higher. I work in the writing center of a local college, and I’m an author — a job where words are important.

During one session with a student, we were going over her English paper when my mind went blank. It was as though a wave of fog had enveloped me. I could feel the anxiety rising inside me as I tried to shake it off. I excused myself for a minute, came back and proceeded as best as I could.

When these symptoms began, I was in my late 30s, both building my writing career and carrying the brunt of the emotional labor for our household as a mother and wife. The last thing I had time for was focusing on my body. Besides, I had such horrible health insurance, I couldn’t justify the out-of-pocket expense of going to a doctor to tell them about my vague symptoms: sleeplessness, anxiety, forgetfulness. For years, I continued to brush them aside and make excuses.

And then my period began to go haywire. I would skip a month or two and then, with no warning, my bathroom would look like a murder scene. I began carrying tampons to work every day because I never knew when my period would show up. Sometimes I even wore a panty liner on “just in case” days.

When I began spotting in between periods, I finally called my OB-GYN. The nurse listened to my list of symptoms over the phone and said, “It sounds like you’re in perimenopause.” Those words would change my life. I finally had a name — and validation — for my experience.

Unfortunately, when I arrived for my appointment, my doctor wasn’t interested in talking about whatever this perimenopause thing was, and instead suggested doing a cervical biopsy. It felt extreme to perform what I knew to be a painful procedure without further discussion. When I asked if this could simply be “perimenopause,” as the nurse had suggested, he shrugged and said, “Unfortunately, we live in a litigious society, so I’m recommending this procedure.” Then he turned his back to me while typing on his iPad. I left the office crying, feeling betrayed.

A few months later, I was driving down the road on my way to the college when I realized I couldn’t see the street signs. I had forgotten to put in one of my contact lenses. It would have been better if I had simply forgotten both. I could chalk it up to being in a hurry, but I could not imagine how I put in only one contact lens and called it good enough. As I headed back home, I wondered how I was going to explain this to my boss. Luckily, she was incredibly understanding.

That day on the road scared me. Shortly after, I went for my annual physical and told my primary doctor what happened. He joked that I was getting old. I chuckled along with him, but my instincts told me there was more to it than aging; after all, I didn’t feel old. That was the moment I realized I couldn’t go on like this. I had to start focusing on and respecting my body.

I found a homeopathic doctor who sat with me for an hour discussing diet, sleep patterns and stressors. She also gave me treatment options, which empowered me to make decisions about my care. I did my own research and learned that aerobic exercise could improve my symptoms, so I began doing high-impact workouts like boxing and running. Both helped reduce my anxiety and my insomnia, which is not gone but is significantly better. I cut way back on sugar, alcohol and processed foods, and I stay hydrated. Sometimes I even schedule acupuncture and massage sessions. For the first time, I was finally taking care of myself. 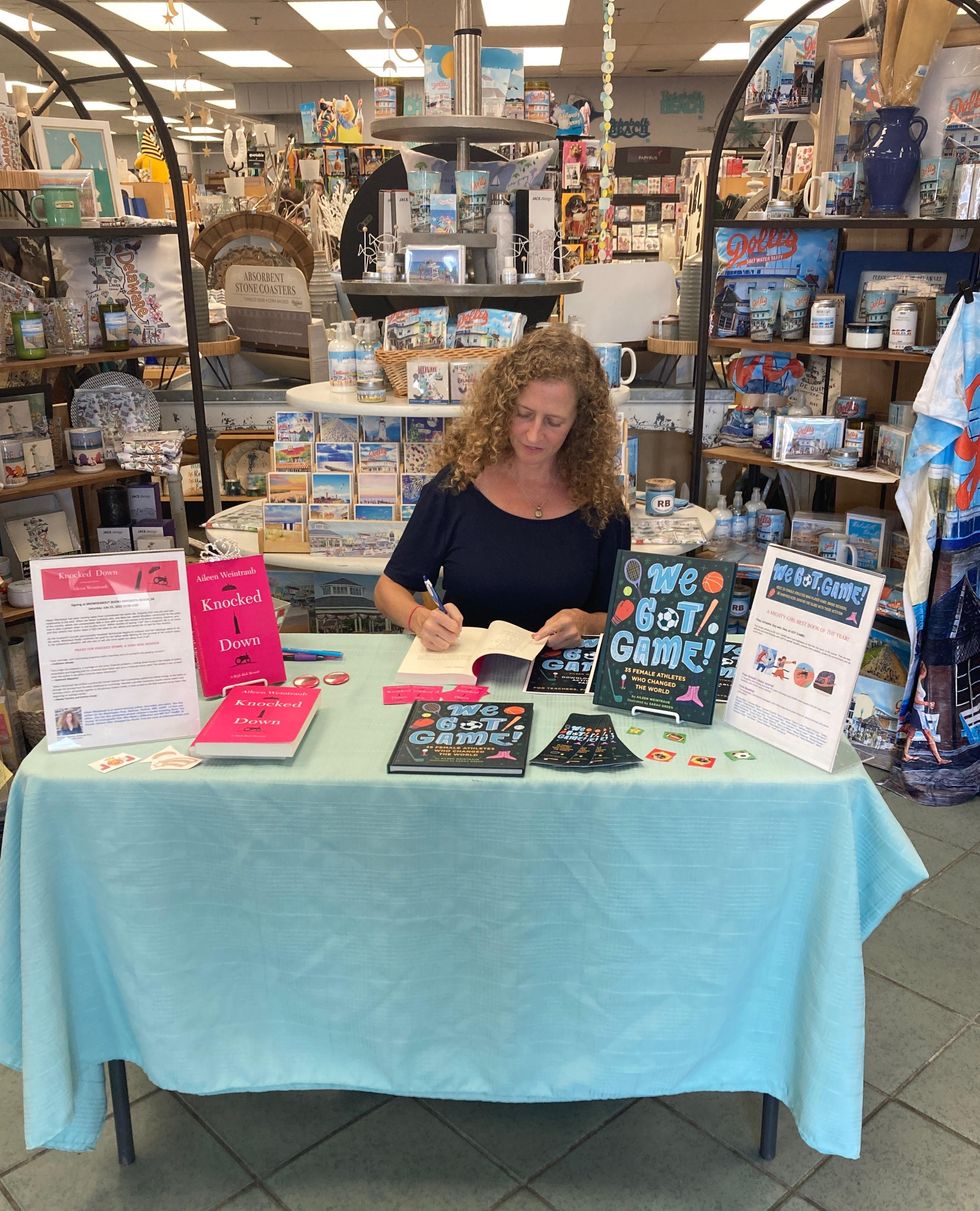 Aileen Weintraub at an author event for her books, “Knocked Down: A High-Risk Memoir” and “We Got Game! 35 Female Athletes Who Changed the World,” 2022.

When my latest book came out, I began doing a lot of guest appearances. I was in the middle of a live Zoom radio show when my body began to heat up like an inferno. I got so distracted and was so worried the host would see the beads of sweat forming on my forehead, I completely forgot what we were talking about! Instead of panicking like I might have done in the past, I took it in stride and kept talking. When the interview ended, I headed to the bathroom and ran cold water on my wrists, and then I got back to work preparing for multiple book events — because we don’t get days off for being a woman. And we won’t until society starts talking more openly about menopause and begins to acknowledge this transition in a meaningful way.

Now that I understand what’s happening to my body, I’m more confident about managing my symptoms while working. I know the next hot flash will pass. When I can’t remember a word, I use another one. When I can’t sleep, I read. I don’t berate myself or feel guilty. I’m taking it in stride, honoring and embracing this time in my life as a rite of passage. Instead of looking at menopause as the end of something, I now see it as a new beginning. After all, I — like so many women — have work to do.

From Your Site Articles

Related Articles Around the Web

A Dietitian’s Guide to Candy